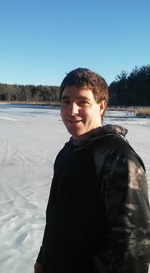 On Wednesday, October 21, 2020, Dustin Eli Dextraze, beloved son and father passed away at the age of 39. Dustin was born on October 6, 1981 in York, Pennsylvania to Dennis and Pamela Dextraze. He was married to Bonnie Staples on February 26, 2005. They had 3 sons, Dustin, Devin, and Dyllin.

Dustin loved to live on the edge. When he was young, he learned to walk the tightrope for a TV commercial. He trained in kickboxing and rode dirt bikes and a motorcycle. He was very proud of his brother, Derek, for writing The Pumpkin Wizard books. Dustin loved everybody. He had a big heart for people. His life was a beautiful gift of light & love to so many of us. Dustin passed away with his family at his side and is at peace now.

Dustin is survived by his mother and stepfather, Pam and Dan Stack, his father, Dennis Dextraze, his brothers and sister, Derek, Elias, and Dawn. He is also survived by his grandparents, James, Henri, and Virginia Stack, his sons, Dustin Jr., Devin, and Dyllin and several aunts, uncles, and cousins.

Per his wishes there will be no funeral service.