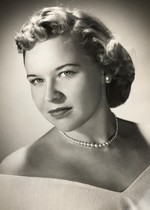 Joan C. Kozinski passed away on 09/30/2020 in Rochester, NH at the age of 88.
Born in Passaic, NJ, raised in Garfield and Clifton, NJ and formerly of Morrisville, PA, Joan has been a resident of Epsom, NH for many years, and more recently in Rochester, NH.
Joan spent most of her working career as an administrative assistant working at Bell Telephone, Rider College, and the State of NJ.
She was a long-time member of St. John the Evangelist Church in Morrisville, PA and later a communicant of Immaculate Heart of Mary Church in Concord, NH.
She was a very spiritual woman and enjoyed writing, crossword puzzles, and spending time with family.
Joan is preceded in death by her parents, Julius and Anne Kazimir.
Beloved wife of the late Alfred P. Kozinski, Joan is the loving mother of John Kozinski, Therese Rodriguez (Thomas), Elizabeth Atkinson (Christian), Matthew Kozinski (Dahe), Mark Kozinski and Michael Kozinski.
She is the devoted grandmother of 8 grandchildren. She is also survived by her loving sister, Virginia Nazimek (Joe), and loving brothers Jules Kazimir and Allan Kazimir (Joan).
In lieu of flowers, memorial contributions may be made to Catholic Charities, 23 Grant St., Rochester, NH 03867.
Private funeral services will take place at Purdy Memorial Chapel in Lee, NH followed by interment. To sign our online guestbook, please go to www.purdyfuneralservice.com