To share your memory on the wall of King Pfeiffer, sign in using one of the following options:

Receive notifications about information and event scheduling for King

You will receive any future notification messages.
No funeral details available.

We encourage you to share your most beloved memories of King here, so that the family and other loved ones can always see it. You can upload cherished photographs, or share your favorite stories, and can even comment on those shared by others.

Posted Jan 08, 2021 at 05:16pm
Sad to learn of King’s death. As a LCDR in 1963, he took command of the submarine USS THORNBACK (SS418) based in Charleston. I served as one of his Junior Officers for these two busy years with operations in the North Atlantic , Mediterranean and Caribbean Sea. A fine man. I learned a lot, and extend my thoughts to Karola and family. Dave Banner, West River, MD
Comment Share
Share via:
JG

Sorry to have heard of his passing, Karola. Condolences 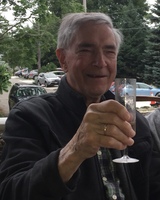