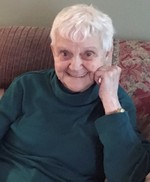 Marilyn Perkins Spencer age 85, of Dover NH passed away on Thursday February 4th 2021 at Wentworth Douglas Hospital with her daughter Robin L. Gaudreau and daughter in law Jeanna S. Polonchek by her side. She was born on January 4th 1936 in Portsmouth NH. Marilyn was the daughter of Louis Spencer and Alice Johnson. Marilyn enjoyed decorating her home, listening to music, shopping, watching TV, attending church and spending time with her daughter and friends.

A funeral service will be on Saturday February 20th 2021 at 11:00 a.m. at Saint Mary’s Church One Power Street Norton, Ma. Visitation will begin at 10:30 a.m. and mass will start at 11:00 a.m. To sign our online guestbook, please go to www.purdyfuneralservice.com