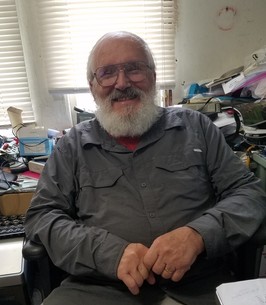 Richard J. Bailey (The Old Fhart, RJB43) died on February 4,2022 at his home in Rochester, NH. Richard who had a photographic memory for hiking trails, a total recall of lines from almost every movie he had ever seen was a master punster, and had a love of all thing's clocks, has left a huge hole in the heart of friends and family. He is survived by his wife Candy, his three daughters: Karen Pepin and husband Greg, Sarah Bailey, and Cassie Givara and husband Jeff. He also leaves four grandchildren: EJ Pepin, Mae Oakes, Delaney and Elodie Givara. Richard leaves two brothers, Don and Maurice Bailey. He was predeceased by his son Jon, and his brother Fred.
Richard was born in Berlin, NH and spent his childhood in West Milan. He had an early love of the outdoors working for the Forest Service and hiking in the White Mountains. He climbed the New Hampshire 4,000 footers and then again in winter, the New England 100 Highest and again in winter, the John Muir Trail, the Long Trail, and the Appalachian Trail ( 2 ½ times!). He was continually drawn to the 100 Mile Wilderness in Maine and to Mount Washington, which he summited more than 50 times. His favorite employment was working in the Mt. Washington Observatory for four winters.
Once mountain climbing became a bit more difficult Richard discovered geocaching and became an ardent cacher. He logged more than 10,000 caches both in New Hampshire and other states.
While he hiked and geocached, he took in the world around him photographing people and nature with incredible talent. His photos won awards locally and were published nationally. L.L. Bean used some of his hiking photos in an ad campaign.
As a last show of strength against pancreatic cancer he obtained his Ham Radio license while undergoing chemotherapy.
In lieu of flowers honor his memory by making a donation to a local nonprofit or taking a moment to look around and see the beauty in the wonderful things in nature.
The family will hold a celebration of Richard’s life on September 24, (the 24th anniversary of his 2nd hike of the Appalachian Trail) from 1-4 pm at the family home in Gonic, NH. Family and friends are invited to come, share, and get together to remember Richard’s life. In keeping with Richard’s many pastimes dress will be casual. For information or directions email: scpbailey70@gmail.com