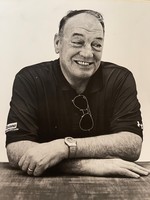 On Wednesday, February 3, 2021, Stephen R. Glynn, loving husband, father, and grandfather, passed away at the age of 63 at his home in Barrington, NH.

Stephen spent most of his childhood in Newfields, NH and was a graduate of Exeter High School. He enlisted in the US Army in 1975, where he met his wife Yun Cha while stationed in South Korea. They were married on July 19, 1979. After many years of proud service to his country, he was honorably discharged in 1981. Stephen and Yun Cha went on to raise two wonderful children, a son and a daughter, and were delighted when they became grandparents to three grandsons.

Stephen was gifted with a talent for the trades and held numerous degrees and certificates in a variety of different fields. He built his career as an HVAC technician as well as a master plumber. He found joy in taking apart various items only to learn how they would function. His hazel eyes would then sparkle as he would explain his findings to all that would listen.

Stephen had a strong presence but underneath his gritty red exterior was a man filled with kindness and wit. His understanding nature and overall compassion for those he cared about often lead to him being the sought after friend in times of need - Stephen always rose to the occasion.

Stephen enjoyed spending time with his grandsons, chasing them around the house while playfully threatening them with a “pop in the snoot”. When he wasn’t generating giggles from his grandsons, he enjoyed reading Fantasy novels and donning his headphones to sing along to Peter Frampton and the Bee Gees. On nice days he could be found driving his Midget convertible whilst wearing a flat cap and sunglasses.

Stephen is survived by his wife Yun Cha, his two children, Scott and Nancy, two grandsons Hunter and Clayton, his sisters June, Gini, and Lisa as well as several nieces and nephews.

Due to COVID-19 regulations, the family will be holding a private service. Flowers or donations can be sent to 126 Michael Dr, Barrington, NH.