To share your memory on the wall of Clara Ellen Perry, sign in using one of the following options:

To send flowers to the family or plant a tree in memory of Clara Ellen Perry (Yeaton), please visit our Heartfelt Sympathies Store.

Receive notifications about information and event scheduling for Clara Ellen

We encourage you to share your most beloved memories of Clara Ellen here, so that the family and other loved ones can always see it. You can upload cherished photographs, or share your favorite stories, and can even comment on those shared by others.

Posted Sep 26, 2020 at 08:56am
Yesterday, today and tomorrow. The Ellen I knew was never given to political hate speech or buoyant platitudes. She was a tower of strength, kindness and dignity. She is not forgotten.
Comment Share
Share via:
NY

Posted Sep 18, 2020 at 05:37pm
Clara and I met in the 8th grade, where we were in Mr Shea's class at Fairview Memorial School. In high school, we were in the same home room and had many classes together for 3 years, until her family moved to Hawaii with the Air Force. We did not have much contact for a very long time. I moved to New Mexico in 2005, and not long after moving, I got a letter from Clara. She had found me searching the internet. After we reunited, I would make plans to see her when I was in NH. We had lunch or breakfast out, and talked about our lives. She was so smart! We would laugh about Trump, and his inability to speak a coherent sentence! Her name for him - "The Orange Buffoon" - was something I adopted for my own use.

I think that the last years of her life, after finding out about the cancer, were done with strength and composure. My life was better having known Clara.

My heartfelt condolences to her family, especially her mom.

Charlie Perry, her husband received a very short obit 9mmitting his 5 grandchildren he very much loved and who loved he and Elle ...a shame once he died they no longer existed. But they did and do 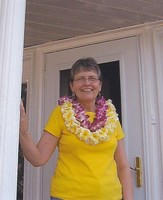